Today POTUS delivered his speech to the UN General Assembly. Chronicles of the event will focus on the assembly giggling in response Trump’s self-congratulating bravado about his administration’s alleged feats in the past few years. I find much more interesting what he actually said on foreign policy:

“We believe that when nations respect the rights of their neighbors, and defend the interests of their people, they can better work together to secure the blessings of safety, prosperity, and peace.”

“America will always choose independence and cooperation over global governance, control, and domination.”

“As my administration has demonstrated, America will always act in our national interest.”

“Inside everyone in this great chamber today, and everyone listening all around the globe, there is the heart of a patriot that feels the same powerful love for your nation, the same intense loyalty to your homeland.” 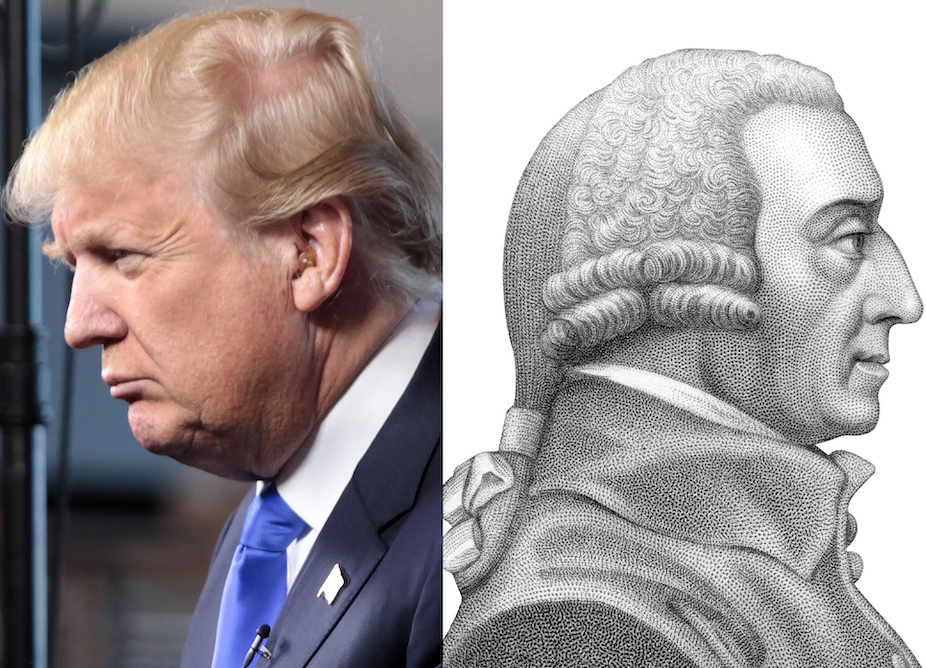 There you have it. The US foreign policy is worryingly the geopolitical version of the often misunderstood “invisible hand” of Adam Smith: the global arena as a loosely regulated marketplace where cooperation is contingent on convergence of actors’ interest and where the pursuit of national self-interest of individual countries ultimately benefits the international community as whole. No need of standing alliances, permanent covenants, cooperation regimes. As Smith wrote in the Wealth of Nations:

“It is not from the benevolence of the butcher, the brewer, or the baker, that we expect our dinner, but from their regard to their own interest. We address ourselves, not to their humanity but to their self-love, and never talk to them of our necessities but of their advantages.” The Wealth of Nations, Book IV, Chapter II, p. 456, para. 9.

Is Trump’s doctrine the Westphalian paradigm reloaded, a new breed of Hobbesian realism, a geopolitical version of economic laissez-faire and market efficiency? If so, we are in trouble. Recent experience has taught us that markets do actually need a minimum of regulation – so Adam Smith also thought. Moreover, some of the most essential goods, such international security and stability in the case of international affairs, are public goods which can only be provided through a collective arrangement which require a country willing to undertake a role as ultimate, disinterested guarantor – otherwise, as Mancur Olson warned, “rational, self-interested individuals will not act [voluntarily] to achieve their common or group interests.” The US under Trump is relinquishing that role. All is surrendered to the invisible hand of the international geopolitical marketplace.

But was all this entirely new and unexpected? Was there prior trend paving the way, eroding the credibility and belief in an active US foreign policy? Possibly. We may find an answer in these comments of Henry Kissinger on Obama’s foreign policy in an interview published by The Atlantic in 2016.

“[T]he argument goes, America contributes to the vindication of its values by withdrawing from regions where we can only make things worse. We must take care lest the Obama Doctrine become an essentially reactive and passive foreign policy.

“In my opinion, Obama seems to think of himself not as a part of a political process, but as sui generis, a unique phenomenon with a unique capacity. And his responsibility, as he defines it, is to keep the insensitive elements of America from unsettling the world. He is more concerned with short-term consequences turning into permanent obstacles. Another view of statesmanship might focus to a greater extent on shaping history rather than avoiding getting in its way.”

View all posts by Toni Timoner-Salvá

This site uses Akismet to reduce spam. Learn how your comment data is processed.